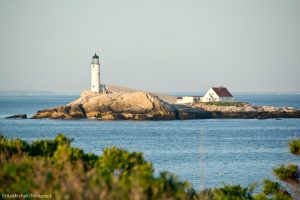 Located in the Gulf of Maine just off the East Coast is a cluster known as the Isles of Shoals. These islands are rich in history and adventure, and ferries take advantage of this by offering guided tours to one of the main islands. The ferries travel from Portsmouth, New Hampshire, which is just under a 20-minute drive from York, Maine, a nearby destination teeming with activities and attractions to engage visitors before and after a day of island exploration. One of those attractions is the Dockside Guest Quarters, which offers both lavish lodging and a waterfront restaurant that serves fresh, local Maine fare. Before you indulge in delicious Northern cuisine and luxury however, the Isles of Shoals are calling.

Originally used as seasonal fishing camps in the early 17th century, the nine rugged Isles of Shoals have housed some interesting people and even more interesting stories over the years. Named in 1614 by explorer Captain John Smith (of Pocahontas celebrity), the Isles of Shoals have been a historical fixture for centuries. For instance, Duck Island was used as a bombing range for the U.S. Navy and now serves as a seal colony and wildlife sanctuary. The largest of the Isles of Shoals is Appledore Island, which housed a hotel called the Appledore House in the 19th century. A fire destroyed the hotel in 1914, and the island was supposedly left haunted. Star Island boasts a 150-year-old chapel that still functions as a conference center and is also the only one of the islands to be provided commercial boat service to the mainland. The 25-acre Smuttynose Island was allegedly the site of Blackbeard’s honeymoon and later the shipwreck of the Spanish Sagunto. It was also the location of the horrifying 1873 Isles of Shoals murders.

The Isles of Shoals Steamship Co. operates a ferry that travels every few hours from the mainland to Star Island. River, harbor, and island voyages are available as well as Star Island walking tours. The guided walking tours include pirate tales, ghost stories, graveyard journeys, and a modern-day replica of original fishing outpost Gosport Village. A gift shop and bookstore are great stops to purchase gifts inside the island’s Oceanic hotel. The narrated boat tours also provide plenty of information about the history and culture of the Isles of Shoals as well as spectacular northeastern views from onboard. One prominent island feature you won’t miss is the lighthouse, which is in no short supply. For a more exclusive experience, wedding escapades, business ventures, and other private charters can be booked in advance.

With such exciting historical occurrences and close accessibility to both the Maine and New Hampshire mainlands, the Isles of Shoals are a sought-after tourist destination. For a retreat that is still close in proximity but a little outside the major tourist tumult, the Dockside Guest Quarters are available just north. During your trip to the Isle of Shoals, consider taking a short ride from Portsmouth to York after your island escapades.

Anytime, any reason you are sure to delight them with an unforgettable experience at our award winning inn. Order a gift certificate online instantly!