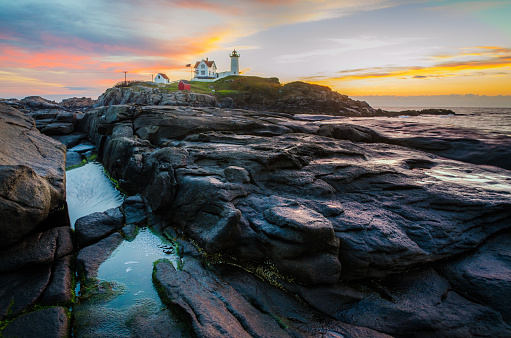 The coast of Southern Maine has no shortage of breathtaking views and historic landmarks, one of which is the famous Nubble Lighthouse of York Maine. A popular site for special events such as weddings, the Nubble Lighthouse of York Maine is also a great place to catch some excellent views, take pictures and maybe even paint one, go scuba diving, fishing, or just hang out and relax for a while by the crashing waves. If you’re a sucker for breathtaking oceanside views and historical buildings, you definitely don’t want to miss a chance to go explore this amazing New England lighthouse the next time you are visiting York, Maine.

Located 100 feet offshore, the public is not allowed out to the island upon which the lighthouse sits, but Sohier Park is a lovely place to visit and observe its beauty. The Nubble Lighthouse of York Maine is home to a gift shop and restroom facilities, both of which are open only during the warmer months of the year, which is typically from April through October, depending on the weather. The gift shop is open seven days a week from 9 am to 4 pm until mid May when it’s hours extend to 7 pm through October. There is a large parking lot that can accommodate about 60 cars. Fishing, scuba diving, and bird watching are popular activities at Sohier Park, which is also a great place for a picnic lunch, with water fountains available in season. Dogs are welcome here, though must remain on a leash at all times.

History of the Nubble Lighthouse of York Maine

In the colonial times of New England marine traffic was central the economy up and down the coast. With the reality of the rocky Maine coastline, ships were often in danger of crashing into the odd rocks out at sea barely visible in the light of day, such as the one that the Nubble lighthouse of York Maine is built upon. Citizens in the area petitioned the United States government for the means to build a lighthouse on this nub of land in the ocean to keep sea merchants safe on their journies. In 1874 President Rutherford B. Hayes allotted $15,000 for the project to commence. On July 1st, 1879 the construction was finally complete and keeping seafarers safer than ever.

In 1939 the U.S. Coast Guard took over caretaking for the lighthouse, renaming it Cape Neddick Lightstation, which eventually became automated as technology advanced. Since the Coast Guard left their station on the Nubble Lighthouse island it has been added to the National Register of Historic Places, ensuring its upkeep. In 1997, the town of York, Maine officially became the permanent guardian of the lighthouse, ensuring that visitors like yourself can enjoy its beauty year after year.

If you have yet to visit this amazing and intriguing landmark and one of the most beautiful lighthouses in Maine, don’t miss a chance to visit the Nubble Lighthouse of York Maine on your next visit to this stretch of coast. Whether just for a stroll along the ocean, or a day of outdoor adventure, you’ll love this picturesque setting.

The health and safety of our guests and staff are our top priority, and we have made some important changes to prepare for your future visit to Maine. Find out how you can stay small, stay safe and we hope to welcome you soon!