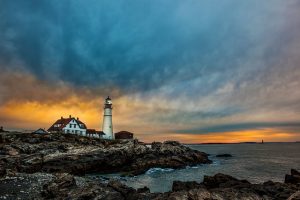 The Portland Head Lighthouse is situated on the beautiful shores of Fort Williams Park. This popular landmark and tourist stop is owned and managed by the Town of Cape Elizabeth, Maine. Whether you want to explore the rich history and construction of the Portland Head Lighthouse, visit the award-winning museum, or explore the 90-acre Fort Williams Park, there is much to see at this destination.

In 1776, before construction of the lighthouse, eight soldiers were posted at Portland Head to notify those in the area of oncoming British attacks. Cape Elizabeth residents were committed to the fight for American independence, and Portland Head played a large role in keeping them safe during this time.

Just 11 years after those guards stood to protect Cape Elizabeth citizens, the General Court of Massachusetts allotted $750 to begin construction of the lighthouse. Finally in 1791, Portland Head Lighthouse was lit for the first time. The oldest lighthouse in Maine has been watching over the shores of Cape Elizabeth and bringing in visitors to enjoy its beauty, since its first light.

With an admission fee of only $2, The Museum at Portland Head Light is one place you can’t afford to miss. This museum occupies the former Keepers’ Quarters. With the vast selection of lighthouse lenses and different displays, you can learn more about Portland Head Light and the history that surrounds it. The museum is open daily from Memorial Day to the Friday after Columbus day. It is open on weekends only from mid-April to Memorial Day and Columbus Day to just before Christmas.

After viewing the Portland Head Lighthouse and museum, head over to the adjacent Fort Williams Park. The park was officially purchased by the Town of Cape Elizabeth on December 1, 1964, for $200,000. This purchase included the old military buildings as well as Goddard Mansion, built for Colonel John Goddard from 1853-1859. The park features playing fields, tennis courts and a beach. It hosts different events throughout the year, so make sure to check the website for updates. There is no admission fee for the park and it is open year-round from sunrise to sunset. With nearly one million visitors each year, Fort Williams Park is a very desired attraction. Whether people visit for the recreation, tourism, or leisure, Fort Williams Park is beautiful and rich with our country’s history.

By staying here at Dockside Guest Quarters, you can enjoy our relaxing atmosphere and plan a day trip to see the magnificent Portland Head Lighthouse. Make sure to view our Maine Escape Vacation Package when planning your trip to the beautiful York, Maine. This package includes two nights lodging with a water view room, dinner for two both nights, and breakfast each morning, leaving you plenty of time to meander around the lighthouse and still come back for a lovely evening. We look forward to your stay here at Dockside Guest Quarters.