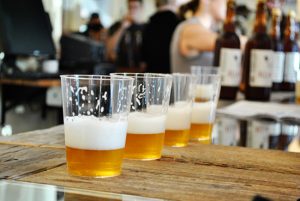 What could be better than an ice cold beer after a day of adventure? An ice cold local beer! Lucky for you, Maine is home to 45 breweries, so your hardest decision will be which local beer to taste first. Let us help you narrow it down. Here’s a list of our favorite Portland ME breweries.

Allagash Brewing Co. opened in 1995 by Rob Tod, a man with an appreciation for Belgian-style beers. Tod realized there weren’t many breweries offering Belgian-style beers in the U.S. He saw an open market and decided to go for it. He released his first batch of Allagash White in the summer of 1995. Allagash Brewing Co. now offers six year-round beers, as well as seven yearly releases and a few smaller releases.

If you don’t have time to take the Allagash brewery tour, Allagash Brewing Co. also offers tastings in its onsite retail store.

For a taste of nearly all Maine-brewed beers, stop by the Great Lost Bear. This restaurant/pub has 69 taps with more than 50 craft beers from the Northeast and 15 Maine microbreweries. It also features a Craft Beer Showcase every Thursday from 5-9 p.m.

Other Portland ME breweries include:

Portland, ME is about an hour’s drive from the Dockside Guest Quarters, making for a great day trip. After touring a local brewery or two, come back and relax at Dockside Guest Quarters in York, ME. Our accommodations include guestrooms in the Maine House, separate suites in multi-unit buildings, and a seaside house. During your stay, be sure to reserve a table at our Dockside Restaurant, featuring fine dining in a comfortable atmosphere.

Be sure to check out even more recommendations for activities, attractions, and things to do in Portland, Maine, or York, Maine.